Have you ever noticed that while the outside of our bodies come in a lot of different sizes, shapes and colours, the pictures we see in textbooks of our insides all sort of look the same? There have been important calls for more diversity of models in educational materials. But seriously, are everyone’s insides exactly the same?

Well, not quite! One area where this is very true is our reproductive organs. We rarely see labia minora that are larger than labia majora in diagrams, for example, even though that more accurately reflects the genitals of about 50% of people. Another example is the uterus.

Most (about 75%) of uteri are slightly anteverted, which means tilting forward. But that means a good many people have a uterus that tilts backwards, away from your belly button. This is called a retroverted, or tilted or tipped uterus.

You might be wondering how someone can tell which way their uterus tilts, and can it cause any problems. Well, come along for the ride as we explore the twists and turns involved in owning a tilted uterus! 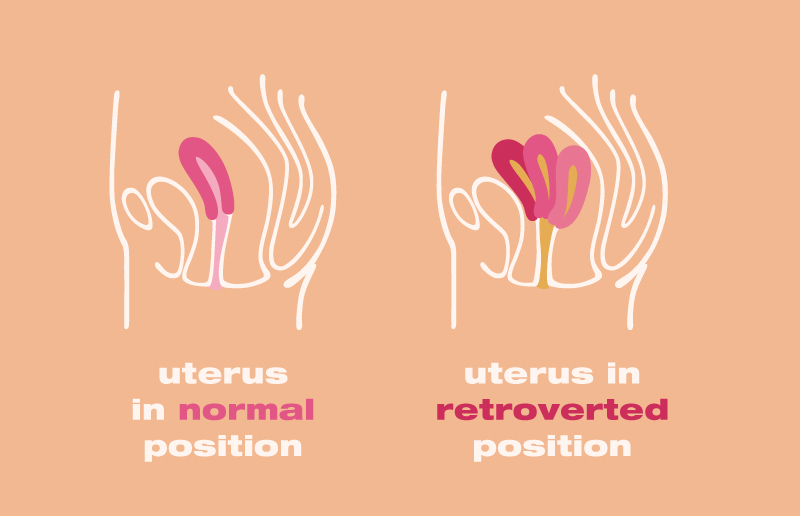 What in the Wandering Womb?

So what’s up with tilted uteri? How does it happen and what are the symptoms? Well, you can go ahead and take a deep breath because…you probably don’t know you have one!

Many people don’t realise they have a tilted uterus. While sometimes caused by an infection, it’s usually just a natural difference. Take eye distance. Some of us have eyes like Harry Melling and some of us like Anya Taylor-Joy. It doesn’t affect how our eyes work, it just makes us unique!

It’s even possible your doctor has noted the position of your uterus on your chart after pelvic exams and never bothered to mention it! Because really, it can have no noticeable symptoms or effects at all. If you do have a tilted uterus, it’s possible you have noticed the following:

But those are pretty common anyway! Previously it was thought that your fertility might be impacted by having a tilted uterus. According to the Mayo Clinic, that doesn’t appear true. Though if the tilt in your uterus is caused by scars (usually from endometriosis or another infection) can pose challenges for fertilization. In that case, it’s best to talk to a fertility specialist!

Can I Use a Menstrual Cup if I Have a Tilted Uterus?

Yes, you can! However, the position of your uterus (and thus cervix) may affect the size, style, and insertion technique that are most comfortable for you. That’s why getting to know your body is so crucial to menstrual cup success.

Knowing your cervix height makes a difference in cup choice, so check out our guide on how to do that. When it comes to position, did you know that your cervix might not be exactly in the center? So if your cervix is off-center or your uterus tilted, knowing that will make it easier to adjust your techniques when inserting. It’s all about finding what works best for your body!