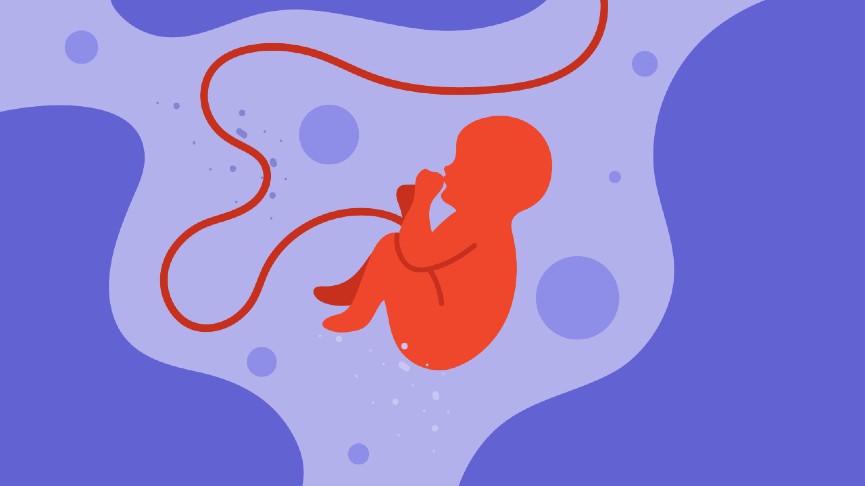 The ability to grow and support life within our bodies, is nothing short of a miracle.

Pregnant people are putting in hard work for almost a year in their efforts to bring a new human into the world.

Did you know that not only are they growing a baby, but also a whole new organ?

That’s right, the placenta is a temporary organ that grows only during pregnancy, and is vital for transporting oxygen, blood, antibodies, and nutrients to the growing fetus.

How Does The Placenta Develop?

Growing a placenta is a collaborative effort, developing from both the pregnant person’s and the fetus’ tissues.

In early days of development before implantation the fertilized egg, known as the zygote, goes through a complex process of cell division in the fallopian tubes. The zygote then moves to the uterus to prepare for implantation, where it becomes a blastocyst. This is when some cells continue to develop the fetus, while others get to work on the placenta.

While the placenta doesn’t reach total maturity until about week thirty-four, it is considered formed about twelve weeks in pregnancy.

In a normal pregnancy, the placenta attaches to the uterine wall, while the umbilical cord comes out the other side and connects with the developing fetus at their navel. There are certain conditions, like a potentially life threatening placenta abruption, that can cause the placenta to detach from the uterine wall.

By the time the placenta is fully developed, it typically weighs between twelve to twenty ounces.

In the case of twins or more, a pregnant person may have multiple placentas. While identical twins will share one placenta, fraternal multiples will typically have more than one placenta. It’s even possible for pregnancies with one baby to have two placentas, if one of the fetuses stops developing.

What Does the Placenta Do?

The placenta is vital not only for supporting the developing fetus, but also the pregnant person.

You’re probably aware that the placenta helps provide nutrients and oxygen from the pregnant person, but that’s not all it does.

The placenta works as a waste management system for the fetus, by removing carbon dioxide and waste from their bloodstream, and putting them back in yours. It also helps to protect the fetus from infections, while giving them antibodies from their parent to help build up their immune system.

This magical organ also secretes essential pregnancy hormones like oxytocin, progesterone, estrogen, and human chorionic gonadotropin (hCG) – which is what is detected during a pregnancy test.

Towards the end of the first trimester, the placenta takes on the role of supplying progesterone to the pregnant person. Progesterone is key in helping curb morning sickness, nausea, and vomiting. Which is why morning sickness is often lessened or ends around this time in pregnancy.

What Happens to The Placenta?

It may seem weird to grow an entire organ for a relatively short period of time – but that’s just what happens.

Just like you deliver a baby, the placenta also needs to be delivered. Typically the placenta is delivered within an hour after the baby is born. Most people who deliver vaginally say the placenta is much less intense following the birth of a baby. Just as in the other stages of labor, the uterus contracts to help remove the placenta from the uterine wall in order to deliver it. Your provider may use manipulation of the umbilical cord to help guide the placenta out.

In some cases, hemorrhaging or excessive bleeding can occur after delivery at the site of placental implantation. This can happen when the uterus doesn’t contract enough to help close the blood vessels where the placenta was. In this case, the provider may use medications, like pharmaceutical oxytocin, to help promote uterine contractions, and/or another procedure.

During a Cesarean section, the OB will remove the placenta during the procedure.

Depending on the birthing person and baby’s needs, some people choose to keep the baby attached to the placenta, by delaying cord clamping and cutting. This could be anywhere from a few minutes, to until the umbilical cord naturally detaches – as in the case of a “lotus birth”.

What Happens to The Placenta?

Some people choose to keep their placenta after birth. This depends on the health of the placenta, cultural practices, and personal beliefs.

Here are just a few ways people use their placenta after birth:

While there is not much scientific evidence supporting the benefits of ingesting placenta, many people swear by it. Anecdotal evidence is powerful, but it’s important to do your research and ask around.

If you’re not squeamish, we suggest doing a quick image search to see what a placenta looks like. They’re actually quite beautiful! Some people say the veins on it resemble a tree of life design. Go see for yourself!