Ovarian Cysts: The What, Why and How of This Common Condition 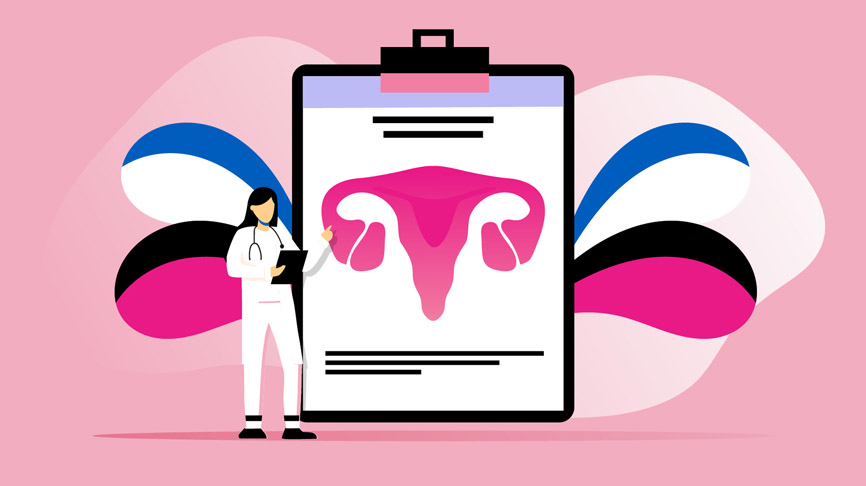 Whether a discovered during routine check-up at the gynaecologists or diagnosed after reporting physical symptoms, no woman wants to hear she has ovarian cysts. But not only are these largely benign growths super common, in most cases they’re a standard byproduct of a normal, healthy reproductive system. Relax, read up and rest assured: a diagnosis of ovarian cysts needn’t be life-changing, and above all, you’re not alone!

What Exactly ARE Ovarian Cysts?

Most women will develop ovarian cysts at some point during their lives, particularly during her reproductive years. As the name suggests, they form in or on the ovaries, which contain hundreds for undeveloped eggs called follicles. Most of the time, just one will make it to maturity a month, at which point the follicle – think of it as a fluid-filled sac – will start creating estrogen, preparing the egg for its imminent journey into the fallopian tube. So far, so healthy ovulation cycle.

On releasing the egg, the follicle continues pumping estrogen as well as progesterone as it gets the uterus ready for a possible pregnancy. In most cases the follicle will spontaneously degenerate before being reabsorbed into the body. Occasionally, though, that doesn’t happen, resulting in a something called a corpus luteum cyst.

This kind of super-common type of cyst is generally termed ‘functional.’ In the same category is the also very common follicular cyst, which happens when those hard-working sacs fail to release their egg properly. Much rarer is something called a dermoid cyst, which forms when cells in the ovary mistakenly multiply, despite fertilization not having taken place. Because of their composition, these clusters of cells might develop recognizable structures such as hair, bone, tissue and teeth.

How Do I Know if Have One?

Most of the time you won’t! In a majority of cases, they’ll develop and disappear without any symptoms, complications or risk. For others, tell-tale signs usually include pressure, swelling, or pain in the lower abdomen or pelvis. Based on these symptoms, your health practitioner may conduct a vaginal ultrasound to spot and monitor any cysts, or simply take a ‘watch and wait’ approach over a period of four to six weeks until they – hopefully – spontaneously resolve.

Pain – it could be sharp or dull – accompanied by more severe symptoms such as fever, nausea and vomiting might point to an infection, or in extremely rare cases, a twisting of the ovary. If that’s the case, it’s imperative that you speak to your doctor right away!

Do I Need Surgery?

Probably not. However, particularly stubborn cysts – those that persist for three menstrual cycles or more – or those larger than three inches in diameter may require surgical removal. It’s extremely unlikely, but if your doctor has any inkling that your cyst might be cancerous, they’ll want it out – pronto!

In most cases, cyst removal calls for a procedure called a laparoscopy. A keyhole surgery performed under general anaesthetic, surgeons insert a tiny tubular microscope into the abdomen via small incisions on the tummy. Cuts will usually be closed with dissolvable stitches, and you might be able to in and out of hospital in a day!

Larger cysts, or those that are suspected of being cancerous, might require something called a laparotomy. Also carried out under general anaesthetic, it involves a single, longer incision that will be closed with stitches or staples.

Could it be Cancer? Can I Still Have Children?

There is a small chance your cyst could be cancerous. However, in premenopausal women – particularly where there is no family history of ovarian cancer – this outcome is unlikely. If an ultrasound reveals a cyst to be solid in mass (as opposed to liquid-filled), expect a blood test and further investigation.

Straightforward cyst-removal surgery doesn’t affect a woman’s fertility. Complications – a twisted ovary or cancer, for example – might require an ovary to be removed. All being well, the other one should continue to release hormones and eggs, meaning pregnancy is still very much on the cards. In rare instances where both ovaries are removed, IVF using a donor egg is also possible.

In other words, a diagnosis of ovarian cysts needn’t – and more often than not doesn’t – impact fertility.

If you’ve been diagnosed with ovarian cysts, don’t panic! With a health practitioner, monitor symptoms: if they don’t disappear of their own accord, surgery might be necessary. For most women, this will be a straightforward procedure, and will not affect fertility. For many of us, the discovery of any medical condition is cause for concern.

When it comes to ovarian cysts, make understanding the cause, recognizing the symptoms, and knowing that you’re far from alone a first step towards feeling better.

2 thoughts on “Ovarian Cysts: The What, Why and How of This Common Condition”