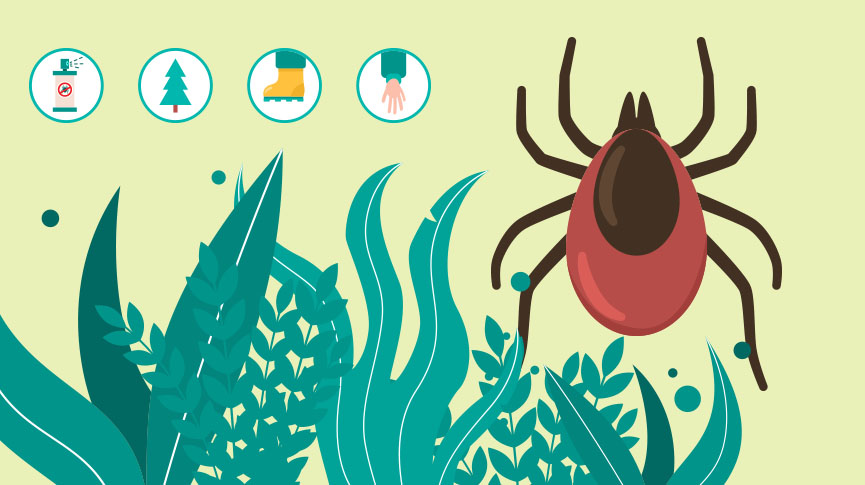 Lyme disease is probably one of the most misunderstood and misdiagnosed conditions out there. If you live somewhere where ticks are prevalent or spend a good amount of time in nature, you probably have Lyme disease on your mind from time to time. Yet many people don’t understand exactly what it is, how it works, and how to protect yourself from it. We’re going to break it down for you so that you can better protect yourself and your family, especially during tick season.

What is Lyme Disease

Lyme disease is caused by a bacteria known as Borrelia burgdorferi, which is caused by you guessed it – ticks. Not all ticks carry this bacteria. It is most commonly found in the deer tick, wood tick, hedgehog tick, and black-legged ticks. Although other kinds of ticks can carry different bacterias that cause other tick-borne illnesses. Ticks that carry Lyme disease can be found across the northern hemisphere including Europe, parts of Asia, the United States, and Canada.

After the initial infection, one tell-tale sign of Lyme disease is a rash called erythema migrans. This occurs in about 70-80% of people infected. This is usually thought to be a bull’s eye shape rash and often is, but this isn’t the case for everyone. It may appear anywhere on the body, not just at the site of the bite. It typically expands gradually over several days, reaching up to 30 cm across, and sometimes more.

Other symptoms of Lyme disease include:

In some cases, symptoms can persist after treatment, or worsen if treatment wasn’t administered in the first place.

The most common symptoms of PTLDS and Chronic Lyme disease include:

Because many of these symptoms aren’t specific to Lyme disease, some people go through a long and exhausting journey before getting a proper diagnosis. This is especially true if they didn’t know they were bit by a tick in the first place. That’s why it’s so helpful to know the signs and symptoms of Lyme disease.

How to Treat and Prevent Lyme Disease

The first step toward preventing Lyme disease is avoiding transmission in the first place. While some ticks bites are unavoidable, especially if you live somewhere where they’re common, there are still steps you can take to help prevent bites.

Checking for ticks is vital because your risk of transmission is much less if a tick is attached for less than 24 hours, although other tick-borne illnesses can be spread in a shorter amount of time. If you find a tick attached, it’s important to remove it with fine-tipped tweezers and not crush the tick’s body as that can release more pathogens into the bloodstream. If possible, save the tick for further testing at a medical testing lab, as this can make diagnosis easier.

If you do happen to get bit by a tick, it’s important to watch for symptoms, and test yourself and the tick for any bacteria present. The most commonly used diagnostic tool for Lyme disease is a series of four tests: ELISA, IFA, Western blot, and Immunoblot. While these are the most common, they may not be the most comprehensive. It may be helpful for you to seek out more accurate testing in your area.

As we mentioned before, cases of Lyme disease that are caught early can typically be treated with antibiotics. If someone experiences long-term complications, treatment can be a long road, and vary from person to person. Long-term treatment protocol should be supervised and administered by a medical professional.

These are some common treatments for long-term symptoms of Lyme disease:

Lyme disease can be daunting if you frequent areas where ticks are present. That being said, there are many steps you can take to be proactive against tick-borne infections to protect your health, and still enjoy time in nature!