What Does it Mean to be Non-Binary? 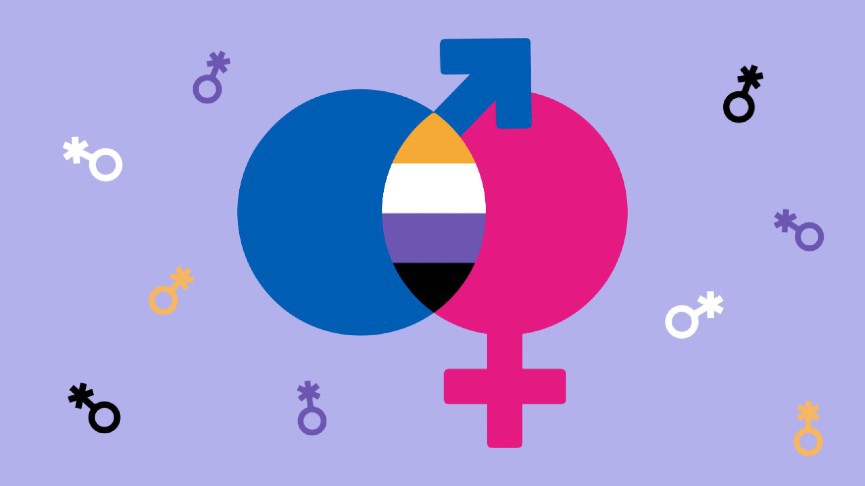 With the growing awareness around the many nuances of gender and sexuality, comes more and more people who identify as “gender non-binary”. If this is a totally new concept to you – not to worry! We’re here to answer some of the most common questions regarding gender fluidity. Maybe you yourself have questioned whether you may be non-binary – welcome! No matter where you are in your understanding of gender, let this be a guide to help shed some light on this somewhat elusive topic.

It’s Not a Third Gender

One common misconception that people have around gender, is that non-binary is a “third gender”. Let’s clear this up right now – it’s not.

The identity of someone who is non-binary is one that is shaped outside of the societal constructs of a strict “gender binary”. Meaning one thing or the other. Male or female. Girl or boy. Man or woman. To so many, this feels rigid, limiting, and downright oppressive.

Before you dive into the world of non-binary-ness, it’s important to have a basic understanding of these terms.

Cis-Gender, is when someone’s gender identity matches that which they were assigned at birth. Ex: “I was born a female, and I identify as a woman”.

Trans: Trans is someone whose gender identity is different than the sex they were assigned at birth. Some trans people’s journey involves hormone replacement therapy and/or surgery, however, it certainly doesn’t have to.

Many trans people also identify as non-binary, or vice versa. In much the same sentiment, every trans person’s journey is highly individualized and they may or may not want to adhere to society’s standards of what it means to be a man or a woman.

To Each Their Own

Someone who is non-binary may feel an equal balance of male and female energies. Or they may feel neither, or ‘a-gender’. They may feel these energies all at once, or never at all, or a constant changing of them, fluctuating much like the Earth’s seasons. There is no one way to be non-binary, and each person’s journey is highly unique to them.

You may have heard other terms floating around like gender non-conforming, genderqueer, and gender fluid. All of these encompass the same idea of having a gender identity that is outside the normal structure of what it means to be male or female.

Genitals Do Not Equal Gender

What someone has in between their legs or on their chest does not define their gender identity.  Having said that, some non-binary people may have gender-affirming surgery (top or bottom), or go on hormone replacement therapy (HRT), as a means of feeling like what’s on the outside reflects how they feel on the inside.

A common societal belief is that when someone undergoes one or more of these treatments, they want to be validated through society as a gender opposite of the one they were assigned at birth. This is not always true, some non-binary people use these treatments as a way of breaking free of the gender binary.

Although we’ve seen a rise of non-binary representation in social media in the last few years, this concept is far from new.

People across the world, like the ancient Celts, and Indigenous people across the globe have not only accepted but revered non-binary people for generations. Native Americans have people who are “Two-Spirit”, that fill very specific roles in their communities.

Much of the time, non-binary people within these communities would serve as a bridge between the spirit and physical realm, between man and woman, and more. This is thanks to their ability to live in a liminal state of being in between and outside the norm.

Gender and sexuality are not the same. While there is overlap, and the two topics go hand in hand, you cannot assume someone’s sexuality based on their gender, and vice-versa.

It’s common for non-binary people to identify as “queer”, “pansexual”, or “bisexual”. Since they are not a cis-gendered person, they would not be considered heterosexual. Heterosexual means “attracted to the opposite sex”. Well guess what? There is no opposite of non-binary, which is where queer comes in.

Non-binary people can also be a-sexual, demisexual, may identify as lesbian or gay, or any other verbage that resonates with them.

Many non-binary people choose to use pronouns outside of she/her and him/his.

Some common ones are…

For some non-binary folx, they choose to use their name in leiu of pronouns. Much like their pronouns, oftentimes people will change their name as a way of affirming their gender. If they strictly use this new name, then the name they were given at birth is called their “dead name”. It is incredibly disrespectful to use this name without their permission.

While someone’s pronouns do not define them, they are an important tool in navigating a world that is filtered through a binary lens.

If you are unsure of someone’s pronouns, just ask them!

It may be uncomfortable at first, but trust that it gets easier with practice, and know that you are being a considerate human, who is respecting the individual in front of them. This will be greatly appreciated!

A little tip; there is a misconception that when asking someone’s pronouns you use the term “preferred pronouns”. This is incorrect. These pronouns are not preferred, they simply are. Instead, just say “What are your pronouns?”.

Gender Neutral is The Future

No matter how your gender identity shapes itself over time, one thing remains the same – it is a reflection of the ever-expanding ways you become more and more true to yourself. To embrace gender nonconformity is to say yes to the vast experiences of what it means to be human – and what is possible within that.

Remember, the future is fluid.

57 thoughts on “What Does it Mean to be Non-Binary?”