Diabetes in Women: The Low Down on High Blood Sugar 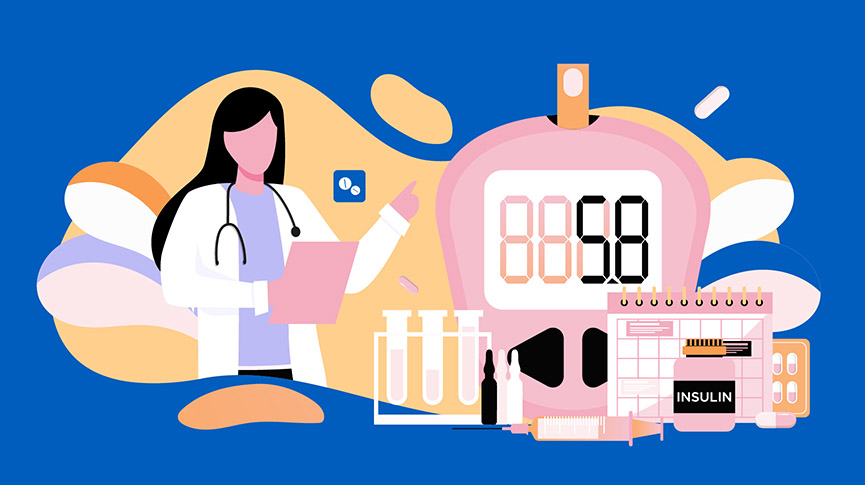 About 10 million women in the United States have diabetes. As many as one quarter do not even know they have it. Knowing more about diabetes can help you identify if you are at risk and help you prevent or delay its onset.

With many myths surrounding diabetes, it’s important to understand the facts about this serious disease. Having diabetes means that your blood glucose (sugar) is too high. A chronic disease that cannot be cured once you have it, diabetes is a serious health condition.

Your body uses glucose for energy – it’s the fuel that keeps you going – but too much glucose is bad for your body.

Most of the food you eat is turned into glucose, which is then taken into the cells around your body through the help of insulin.  Insulin is a hormone made in the pancreas, an organ near the stomach. If your body doesn’t make enough insulin or the insulin doesn’t work correctly, the glucose cannot get into the cells and therefore stays in the blood. This makes your blood glucose high, causing you to have diabetes.

Pre-diabetes is the name used to describe the stage between normal blood sugar levels and diabetes. Early detection and management of pre-diabetes can slow down or even prevent the onset of full blown diabetes.

There are three main types of diabetes:

Type 1 Diabetes is usually diagnosed in children and young adults. An autoimmune condition, it occurs when the pancreas no longer makes insulin because the body’s immune system has attacked and destroyed cells in the pancreas. People with type 1 diabetes must take insulin by injection or with an insulin pump. The cause is unclear and it cannot be prevented.

Type 2 Diabetes is the most common type in adult women: itoccurs when your body doesn’t make enough insulin or doesn’t respond to it properly. This form of diabetes is caused by a combination of genetic and environmental factors.

Gestational Diabetes is a type of diabetes that occurs during pregnancy and usually disappears after delivery. It occurs in about 1 in 20 pregnancies. Women who have had gestational diabetes are more at risk of developing type 2 diabetes later in life.

What are the symptoms of diabetes?

Diabetes may not present itself with any warning signs at all. Or you may have some of these signs:

What complications are caused by diabetes?

Patients with diabetes have higher death rates than people who do not have diabetes regardless of sex, age, or other factors. Some of the complications that people with diabetes face include:

Diabetes can cause specific complications in women:

Women with diabetes are at particularly high risk for heart problems. There is a significantly higher risk for urinary tract infections among women with diabetes, as well as an increased risk of recurrent yeast infections. The changes in estrogen and other hormonal levels that occur during perimenopause can cause major fluctuations in blood glucose levels.

What are the risk factors for diabetes?

What can I do to reduce my risk of developing diabetes?

If you are among those at higher risk, consider getting screened for diabetes by making an appointment to see your family doctor. They will be able to carry out a test to measure your blood sugar levels. This type of test usually requires that you don’t eat for 8 hours beforehand; your doctor will advise you if you need to fast. Write down any symptoms you have, even if they seem unrelated.

Early discovery of an insulin problem is key. Even if you have been diagnosed with pre-diabetes, a major research study conducted by the American College of Sports Medicine and the American Diabetes Association has shown that fullblown type 2 diabetes can possibly be prevented or delayed by focusing on improving the environmental risk factors.

Women in the study lowered their intake or fat and calories, and exercises for 30 minutes a day, 5 times a week. The results showed that physical activity and moderate weight loss lowered type 2 diabetes risk by up to 58% in high-risk populations.

If you are among those at risk of diabetes, these lifestyle changes are important – not only will you be leading a healthier life; you can help delay or prevent the development of this serious disorder.

1 thought on “Diabetes in Women: The Low Down on High Blood Sugar”