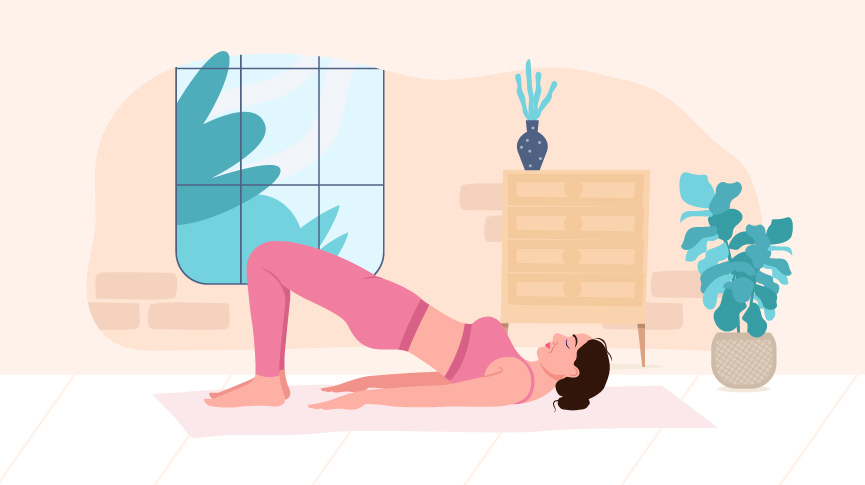 Working from home has many people feeling a lot of aches and pains. Things like neck, shoulder and back pain are common complaints and often associated with poor body posture.

Many people assume posture is all about the back and the spine, but proper pelvic positioning plays an equally important role.

In order to assume the ideal posture a person needs to be able to find their “neutral” spine. This is the midpoint between two extreme pelvic positions.

One is an anterior pelvic tilt, where a person is rocking their pelvis forward and arching the lower back.

The other is a posterior pelvic tilt, where a person moves their pelvis in the opposite direction tucking their pelvis underneath them and flattening their back. This may cause a person to be in a slumped position.

If a person rocks back and forth between an anterior and posterior pelvic tilt, right in the middle is a neutral position and where a person should ideally hang out.

However, many people have a pelvis that is in a slight anterior or posterior pelvic tilt. This can be due to a variety of reasons, one of which is muscle tension.

Many muscles attach at the pelvis, but the key players that can lead to pelvic tilts are the hamstrings and the hip flexors. The hamstrings are in the posterior thigh and are primarily involved in knee flexion and hip extension. There are several hip flexors, we’ll highlight three of them: the psoas, the iliacus and the rectus femoris. The psoas travels from the spine through the abdomen and then attaches at the femur. The iliacus travels from the pelvis joining the psoas to attach at the femur. Finally, the rectus femoris is one of the quadriceps muscles and it travels from the front of the pelvis to the patellar tendon.

If someone has an anteriorly tilted pelvis it is often due to restricted hip flexors. This is commonly due to prolonged sitting since a person’s hips are staying in a flexed position, which leads to tight or guarded muscles.

To assess if someone has a tight hip flexor a clinician may perform a Thomas Test. During this test the patient would sit at the edge of an examination table and lay back. A clinician would observe if a person arches their back as this can be a sign that they have tightness in the hip flexors.  The person on the table would bring one knee up to their chest and a clinician would observe if the person’s stationary leg has moved. If that leg has raised off the table it is a sign that the hip flexors are tight.

It is important to see a healthcare professional determine an appropriate treatment plan, but if someone suspects that they have an anteriorly tilted pelvis there are a few exercises a person can practice.

But please, before you start, consult a healthcare provider prior to doing any exercises!

While laying on their back with their knees bent, gently try to tuck their pelvis under and flatten their back. Make sure to keep breathing and slowly return to the starting position and then repeat. They can do a few repetitions and see how it feels. They can practice this same movement in sitting.

One way to do this is laying on their stomach and gently pressing up on to their forearms and holding for 30 seconds. Another option is to kneel and shift their weight forward, for a greater stretch they can raise their arms up in the air and hold for 30-60 seconds.

While laying on their back with knees bent, perform a posterior pelvic tilt as described above and then squeeze the buttocks muscles and slowly lift their pelvis up off the floor then slowly lower their pelvis back to the floor. Start slow with only 5 repetitions to see how it feels.

Dr. Rachel Gelman is a pelvic floor physical therapist. She is the owner and founder of Pelvic Wellness & Physical Therapy in San Francisco which specializes in treating patients with pelvic floor dysfunction including pelvic pain, bowel, bladder and sexual dysfunction. She is an adjunct instructor at Samuel Merritt University where she teaches the pelvic health curriculum in the Doctor of Physical Therapy program.