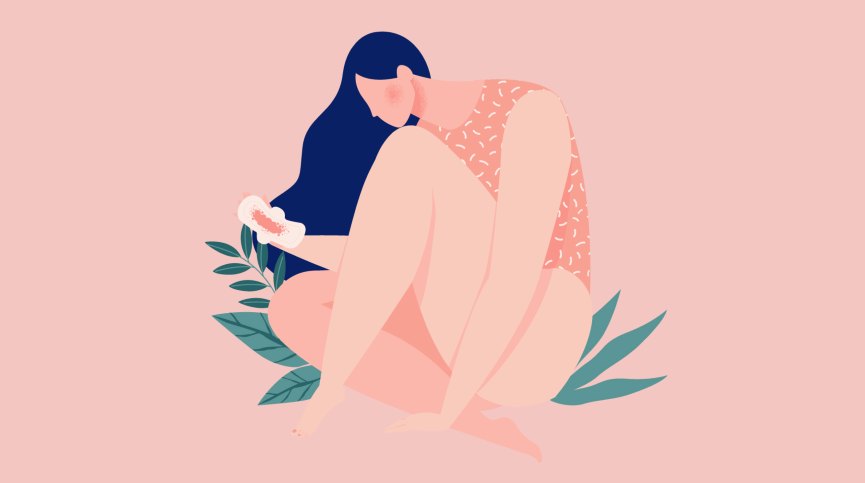 Retrograde menstruation. Unless you’ve experienced it or work in gynecology, you probably haven’t heard of it.

No, it doesn’t have to do with where your Astrological sign is, or where Mercury is currently stationed. This isn’t out of a science fiction film, it’s a real side effect of being a menstruator.

It is, however, what it sounds like. Retrograde, which means to move backward, and menstruation…you catch my drift.

Instead of exiting the body and into your receptacle of choice (shoutout to my Lily Cup), period blood moves back up through the body, flowing through the fallopian tubes, and into the abdominal cavity.

Believe it or not, retrograde menstruation is fairly common and probably happens to all menstruators, at least somewhat. To some extent, this is a normal part of bleeding, and something you most likely aren’t aware of when it’s happening.

While it can potentially cause cramping and pelvic pain, unless it is severe, it’s probably nothing to worry about and can be treated as you would normally treat period cramps.

As you can imagine, if there is an excess of blood and tissues flowing back up into the pelvis, it can potentially cause more serious symptoms and ailments, like endometriosis.

Most of the research that has been done regarding retrograde menstruation, is in relation to endometriosis. While this is helpful to people with endo, it can be limiting in finding other relevant information.

Does it Cause Endometriosis?

If you’re not familiar with it, endometriosis is a painful condition that occurs in about 10% of menstruating people who are of reproductive age, where the lining of the uterus grows outside of the organ.

It is often marked by irregular, sometimes extremely heavy periods, and intense cramps or other pains in the lower back and pelvis.

In the 1920s, Dr. John A Sampson developed the theory that endometriosis is caused by retrograde menstruation. He believed that when blood flows backward instead of out the cervix and through the vagina, it deposits on the pelvic organs and grows into harmful tissue.

As you can imagine, medical research has greatly expanded in the last 100 years, but with limited focus on female reproductive health. While this theory hasn’t been totally debunked, there is a lack of supporting evidence.

There is evidence against this theory in the cases of people who have had hysterectomies and then been diagnosed with endometriosis, as well as in men who have undergone estrogen therapy as a treatment for prostate cancer.

These are two populations that have developed endometriosis without the presence of retrograde menstruation, or any menstruation at all for that matter.

Despite this, Sampson’s theory still stands. Partially because endometriosis is widely misunderstood and underdiagnosed since it can only be definitively diagnosed through surgery.

One idea that supports Sampson’s theory, is that although retrograde menstruation is incredibly common, it’s possible that people who develop the disorder have a compromised immune system or genetic predisposition so that when endometrial cells migrate through the fallopian tubes and into the pelvic cavity, their body isn’t able to clear the cells, which leads to a painful build-up of tissue, aka endometriosis.

One study that observed both women with and without endometriosis, found some interesting evidence normalizing retrograde menstruation, and negating Sampson’s theory.

By tracking cell counts in the subject’s bodies, researchers discovered that there is an increased amount of leukocytes, hemoglobin, and erythrocytes in subject’s peritoneal fluid during menstruation.

In layman’s terms, while subjects were on their periods, researchers found a higher amount of red blood cells in the abdominal fluid that lubricates the abdominal wall and pelvic cavity. This is pretty clear evidence supporting the idea that retrograde menstruation, indeed does happen, and is incredibly normal.

They did not, however, find an increased amount of endometrial cells in the pelvic fluid of people with endometriosis. While this doesn’t support the idea that retrograde menstruation can lead to endometriosis, it doesn’t necessarily negate it either.

If you still have questions about retrograde menstruation, you’re not alone. All in all, it is a very normal part of being a person who bleeds, however it’s difficult to track how much goes in or out, and what that means in the bigger picture of female bodied health – especially for people with reproductive health disorders.

So if you ever hear someone bring up the idea of retrograde menstruation, respond with “I know it sounds wild, but don’t worry, it’s totally normal!”

If you suspect you may be experiencing retrograde menstruation, no need to fret! You and along with about 90% of other people who menstruate.

If you do however start to experience symptoms during your period like intense cramps, nausea, and vomiting, dizziness, or other out of the ordinary symptoms – it may be time to see your provider, as this can be a sign of a more serious condition.