That Time of the Month: What Causes Period Pain? 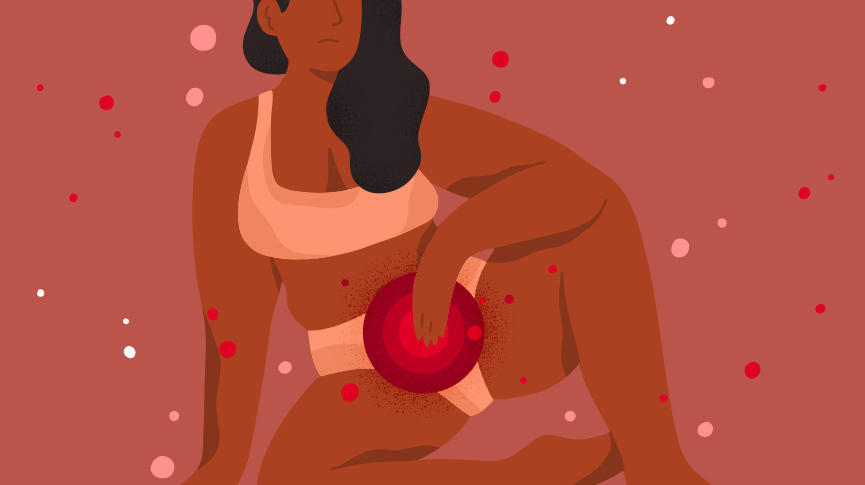 “It hurts so much that I ended up in the emergency room last night” “Yesterday I was writhing in pain under the blanket, I couldn’t go anywhere…so sorry.” “I tried the pills, but they don’t work anymore. I’ve heard that a warm bath might help, but how do I do it. I can not put a little pool in my living room.”

We sre sure you have heard one of these stories from women who have problems with terribly painful periods at least once in your life. For some women, menstrual days are an agony that goes far beyond bleeding. A painful condition that paralizes their life. What are we talking about?

Period pain – or dysmenorrhea as it’s also known – is estimated to affect between 40 – 70% of women of reproductive age, with an unlucky 10% suffering temporary disabling pain before and during the menstrual cycle.

The range of severity can vary enormously, from an annoying, dull ache, through to sharp, debilitating cramps. Whilst for most, pain is centered on the lower abdomen it can also radiate to the lower back and hips. These widely differing symptoms affect a majority of women everywhere, and as such, we’ve also come up with countless ways to relieve these monthly pains.

For many, that includes pain killers, for others, herbal remedies. Some swear by exercise, whilst for many, a long soak in a hot bath helps relieve symptoms. Though it won’t ease the pain, knowing what causes menstrual discomfort can help determine whether what you’re feeling is typical, or whether to seek the advice of a medical professional.

Doctors aren’t entirely certain as to why some women experience more pain than others. It may be that genes play a part in this, and oftentimes period pain is worse in young women under the age of 20.

To understand why you’re experiencing discomfort, it’s first helpful to understand what your period actually is, and what’s going on in the body during these monthly cycles.

Your ovaries release one egg each month – a process called ovulation. In the days leading up to that, the lining of the uterus becomes thick with extra blood and tissue. If the egg is fertilized with sperm, it attaches to that cushioned wall (also called the endometrial lining) where it starts slowly developing into an embryo. If the egg does not get fertilized, however, that thick, bloody layer – along with the unfertilized egg – is shed by the body through the vagina. The whole process is your period.

So how does such a straightforward process cause quite so much pain, you might ask? Well, during endometrial lining shedding, the muscles inside the uterus contract to dispel all that extra blood and tissue out of the body. The menstrual cramps you’re feeling are those muscles tightening and relaxing, which in turn compresses blood vessels within the wall of the uterus. That limits the flow of oxygen and blood to the womb, thereby triggering pain.

What’s more, to help the uterus along with its monthly shedding of the endometrial lining, the body releases chemicals called prostaglandins, amplifying the strength of cramps, and also thought to influence the extent to which pain is perceived in the brain.

The Problem with Prostaglandins

The more prostaglandins your body produces, the stronger the pain and period cramps. What’s more, if excess chemical enters the bloodstream and reaches the bowels it can cause the smooth muscle lining of the large intestine to contract, resulting in diarrhea.

Whilst it won’t cause any long-term harm, excessive levels of prostaglandins are also thought to cause other common side-effects of menstruation, including headaches, nausea, and vomiting.

Because of its frequency, the effects of period pain are unfortunately often overlooked – or worse, disparaged – by employers, colleagues and even doctors. Whilst it may well be that psychological factors do play a part, and a woman’s mental state might influence the production of prostaglandins, menstrual discomfort is most certainly triggered by physical causes.

That’s important to bear in mind, as really severe menstrual discomfort or sudden changes in the severity of symptoms could point to an underlying medical condition. This is known as secondary dysmenorrhea, and can be caused by a number of factors including endometriosis, uterine fibroids, sexually transmitted diseases and even copper intrauterine contraceptive devices. It’s essential that these conditions get properly diagnosed by a medical professional who’ll then prescribe proper treatment.

For most of us, however, pain is only usual felt for a day or two before menstruation, and for some women, the first two days after their period has started. Whilst it may not be pleasant, period pain is generally a sign that our bodies are functioning properly. That may offer little solace when those monthly tell-tale aches kick in, but rest assured, it will pass, and you’re certainly not alone.