Meet the People Who Can Do Everything—Even #WhileBleeding 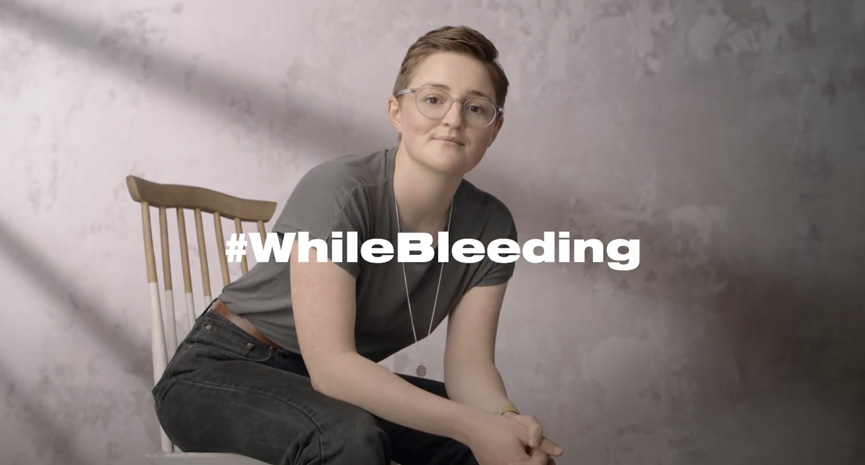 Amazing women are all around us. We gathered six of them to hear their stories about their pain and struggles, but more importantly, get to know them and see how they’ve managed to overcome those obstacles. They are strong, accomplished and brave, especially #WhileBleeding, and they are just who we need to hear from for inspiration!

“We train four times a week. There are 11 people in the group—two girls and nine boys. They do not understand anything about periods. Even my coach, he doesn’t get it.”

As an athlete for the British national team, Annie is used to having to push her body to its limits. She frequently experiences pain while menstruating, including lower back pain, cramps, and migraines. Yet, because she is an athlete she doesn’t take any medication for her symptoms. She believes that her carry on attitude has let her channel her strength to overcome, even #whilebleeding.

“If I came on my period, I would probably have to [go] home. If I was out, there is a high chance that I would feel so unwell I wouldn’t be able to stand.”

Her period pain was always severe, and after years of suffering, a doctor finally suggested she get a laparoscopy—a procedure where a small camera is inserted through the abdominal wall to view the organs. Her diagnosis of endometriosis meant some of her life goals would involve distinct challenges, but she overcame those struggles.

“Because of the journey and because of being so malnourished I had osteoporosis—it really just gave me the willpower to want to recover. And so getting my periods was the goalpost.”

While all of our first period stories are a little different, Emily’s health challenges caused by her fight with anorexia meant she wasn’t sure when or if she would join her peers. When she did begin menstruating? “It was a special moment for me, like an award almost”

“Since learning you’re actually possibly at your most powerful during your period, it’s completely changed the way I look at it. It’s no longer a barrier.”

Even before she became a competitive cyclist, Katherine points to exercise as incredibly important for helping alleviate cramps and headaches brought on by her period. It also, she says, helps a lot with her mood, because cycling is something she lives for as both a competitor and someone who works in cycling media. She may know personally that her period helps performance, but she’s also dedicated to making sure more women become part of, and are represented in, the sport.

“I think there is unfortunately still a bit of a taboo around periods. Everybody should know what it is, or what a woman goes through when she is on her period”

Starting out in the male-dominated engineering sector, Natasha found herself frustrated by a lack of general awareness about periods and what people go through when they are menstruating. It included, she noted, disrespect and dismissal of women’s experiences. As she shifted toward a writing career, she felt empowered to use her voice to end period taboo, and has since collaborated with the Red Box to raise awareness of the End Period Poverty project.

“I think it’s important to be strong, just because you never know what you’re going to be facing,whether it’s out on the street, in the workplace or at home. Strength can really take you a long way.”

At age 13, Emilie knew her periods weren’t the same as everyone else’s. Every month, she would pass out from pain, throw up, get diarrhea, and essentially be stuck on the couch unable to go to school. But it took two years years of intense symptoms before she was diagnosed with PCOS by the doctor. The thought of experiencing this pain 12 times a year until menopause made her desperate enough to ask for a hysterectomy. Instead her doctor put her on a hormonal birth control pill, and she was able to achieve a level of normalcy that makes her sometimes forget her PCOS.

What Can You Accomplish #WhileBleeding? We hope you were as inspired by these stories as we were. We’d love if you would share your stories of accomplishments, big and small, #WhileBleeding. You don’t know what difference you might be able to make for someone going through the same challenges as you!