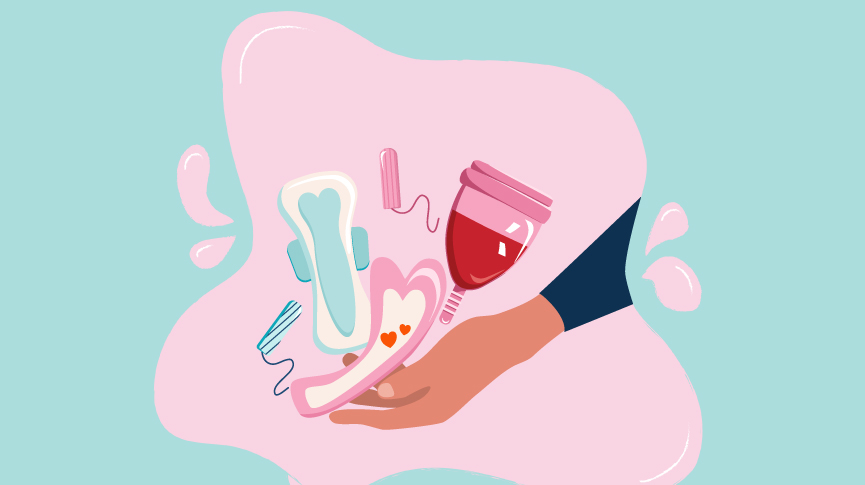 You’ve seen it happen: the collective silence and blushing when a few tampons accidentally fall out of a purse in front of a bunch of male friends. Surprisingly, the taboo around menstruation still causes embarrassment for many women, but the reality is that your period is actually a pretty cool feat of human biology.  Here are some surprising facts (and myths) about periods that might make you see your monthly visitor a little bit differently from now on.

Fact: The Average Monthly Menstrual Blood Loss Is Only About 2 Tablespoons (30mL)

Though it might look like a lot, monthly menstruation doesn’t really release the torrential downpour of blood from our bodies. Pads and tampons absorb all of the fluid, making it difficult to quantify how much is actually coming out.

Menstrual cups, which are made of medical-grade silicone, collect rather than absorb your flow, so you can actually more accurately assess the amount of fluid you lose each month and more easily notice any changes.

Fiction: You Can’t Get Pregnant If  You Have Sex During Your Period

It’s a common misconception that if a woman has sex during her period, she cannot become pregnant. Although unlikely, it is not totally impossible. Sperm can survive inside a woman’s vagina for up to 5 days. If a woman, for example, had unprotected intercourse on the last day of her bleeding and ovulated 3 days later, she could become pregnant.  So if you want to be sure that you won’t get pregnant, be sure to practice safe sex or if you are with your long term partner, to use birth control pills (birth control).

Fact: Menstrual Fluid Is Made Of More Than Just Blood

Another reason it seems like you’re losing a lot each month is that besides blood, menstrual fluid contains cervical mucus, vaginal secretions, and endometrial tissue. Many women mistake clumpy endometrial tissue for blood clots, when in reality it may actually be the uterine lining. Find out more about clots and what they mean about your menstrual hygiene and intimate health here.

Fiction: You Shouldn’t Exercise During Your Period – Rest, Rest, Rest!

This couldn’t be further from the truth for most women… Exercise releases endorphins, chemical in the brain which are the body’s natural painkiller. The American College of Obstetricians and Gynecologists recommends regular aerobic exercise to help relieve PMS, cramps and the stress that can come with that time of the month. And you will feel confident and great after training. For even better feeling after good excersize give yourself a long, warm bath. It will be like period jack pot!

Until it’s exposed to the air, that is. Once in a tampon or pad, air reaches the fluid and it might develop a mild metallic smell – but other people generally won’t be able to detect it. If you’re worried about odor, a menstrual cup can help. Cups are worn internally and form a gentle seal to collect your flow, which keeps the fluid away from the air until you’re ready to empty it – so there’s no smell.

Fiction: Having Sex Is A Big No-No During Your Period

While some women may feel uncomfortable having sex during their period, in most cases, it’s perfectly okay to do so. If you’re worried about mess, lay down a dark-colored towel and stick to the missionary position because lying on your back reduces your flow. If you’re trying to avoid any laundry, then try out the mess-free, period-friendly menstrual cup that’s designed for penetrative intercourse.

Fact: Your Uterus Is Only About The Size (And Shape) Of A Pear

During your period it might feel massive due to cramping and bloating, but your uterus is actually only around 3-4 inches long and 2.5 inches wide.  Both increased blood flow and thickening of the uterine lining tissue might cause the uterus to grow slightly during menstruation, it may feel much more dramatic.

Fiction: Every Woman’s Period Is The Same. Each Cycle Is 28 Days

The menstrual cycle isn’t the same for every woman. A normal cycle can be anywhere between 21 to 35 days and menstruation can last from two to seven days.  You might have regular or irregular period cycles, and your period might be light or heavy, short or long, and with or without cramps. ‘Normal’ is whatever is normal for you Cycles can vary through the years due to medical issues, lifestyle changes, medications and environmental influences. If you do feel concerned about changes in your cycle, contact your doctor for reassurance.

Fact: Cyclical Hormone Changes Might Have You Craving More Than Just Chocolate

Cravings for sugar and carbs, as well as an increased sex drive, can be triggered by a change in levels of the hormone progesterone, which is at its lowest during menstruation. Another fun fact, the hormone surges of during ovulation can enhance your libido when the time is right for conception.  So if you find yourself a little friskier each month, don’t worry, it’s common!

Fiction: Women On Their Period Are More Likely To Get Attacked By Bears And Sharks

This is by far our favorite myth! Apparently, you can’t go camping during your period without the fear of being mauled by a bear, nor can you go near the ocean without suddenly hearing the theme from Jaws. Both of these myths are so prevalent that studies have been carried out to see if they’re true. The results? Both are simply not true. Bears and sharks are not more sensitive to the blood and odor that occur during your menstruation. That’s not to say that we recommend staying in a small, cramped tent during your period, but if you do, you should be safe. If you go swimming or diving, you could even try using a menstrual cup for complete and long-lasting protection.

We already covered period sex, but did you know that orgasms trigger a release of oxytocin and dopamine, along with other endorphins, which all act as natural painkillers? So there’s another point in favor of getting it on during your period, but if you’re not in the mood for intercourse, just remember there are plenty of other ways to reach orgasm on your own.

Talking about history – hard to believe but some people in the past believed that menstrual blood could heal health conditions such as headaches, gout, hemorrhoids, warts, birthmarks etc. If only… In times of witchcraft and demons, period blood was used to fight demons and to cast love charms. And what some treasured the most was actually the virgin’s first blood, which was thought to be a cure for the plagues. In The Middle Ages, some people thought menstruation was the reason for the red hair. So in other words, they believed redhead children were conceived if a woman had sex during her period. Gingers FTW!

Fact: Your Voice Changes During Your Period

Based on scientific research, women’s voices change during the menstrual cycle depending on which stage of a cycle they are currently at. All of these changes are caused by hormones of course. Research shows vocal pitch and intensity vary throughout the cycle.  Even more interestingly, the same study showed that oral contraceptive users, whose hormonal fluctuations are muted, did not show these cyclical voice changes.

Fiction: Periods Were First Mentioned On TV In The 21st Century

Have you heard of the video about menstruation that Disney made in the 40ies? If not, you should definitely check it out. What’s the most surprising and kind of mind-blowing is that this over 80 years old movie is still very up-to-date, it provides all the basic information on the period with a playful visual side.

The tips you can find in the video are exactly the same as written nowadays, talking about the importance of a healthy lifestyle and giving suggestions on how to cope with the cramps and heavy flow. As period enthusiasts, we must say: well done, Disney!

Fact: You Can’t Name All The Euphemisms For Menstruation

Have you heard that there are over 5000 euphemisms for menstruation all over the world? Almost every language there has its own ways of calling period. The menstrual cycle-tracking app Clue, released the survey “Talking About Periods – An International Investigation” where they presented their results, including the most popular period euphemisms.

Our favorite ones are Rote Armee which in German means Red Army, C’est la saison des fraises which in French means That Strawberry session, Finish Hullum lechman tauti which stands for Mad cow disease, Danish Der Er Kommunister i Lysthuset meaning There are communists in the funhouse and Croatian Stvari which simply means Things.

Fiction: We Are The Only Mammals That Menstruate

Last but not least, a fact regarding menopause actually – ever wondered which other female mammals go through these changes? The answer is only two more! So apart from human females, these are humpback whales and elephants. Can you imagine? We are in fact one of the only three breeds in the entire animal kingdom on the Planet experiencing menopause. High five Elephants and Humpback whales!

So that’s all folks. As we mentioned in the beginning, it’s sometimes not only fun but also useful to go through the facts on what often seems to be an unconformable topic, just to realize how interesting and complex women’s bodies are.

We shouldn’t have to hide our periods or worry about others finding out. Our bodies are actually pretty awesome and the more you know about yours, the more informed your health decisions will be. So share all this newfound knowledge with your friends, and don’t be embarrassed to talk to each other about your periods!

If you’re trying to decide which cup suits you best, check out: Which menstrual cup to choose.

Alyssa Dweck MS, MD, FACOG is a practicing gynecologist in Westchester County, New York. She provides care to women of all ages; she has delivered thousands of babies. She is proficient in minimally invasive surgery and has special interest and expertise in female sexual health and medical sex therapy. She is top doctor in New York Magazine and Westchester Magazine. Dr. Dweck has co-authored three books including the most recent release The Complete A to Z For Your V.