Ch-ch-changes: What You Can Expect from Puberty 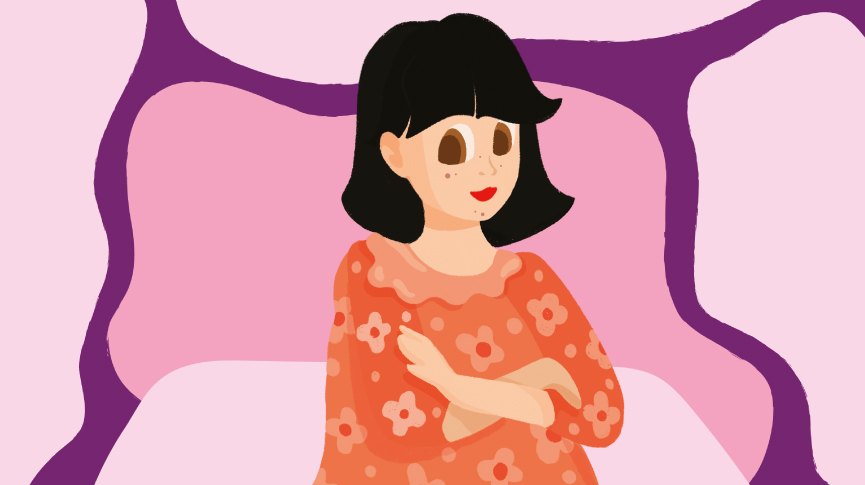 Ah, puberty. It’s a completely natural, ordinary process happening to billions of people at any one time. But it’s simultaneously a huge deal! You might already be going through puberty, or impatiently waiting for it to start. But either way, you’d probably like a bit of a heads up about what’s to come.

We don’t blame you! There’s a lot that happens physically and emotionally during puberty.

Today, we’re going to talk about what you can expect during puberty. (Today, we’ll be focusing on puberty for people with uteruses, which happens a little earlier than for those with testes and a penis.)

Puberty is about a four-year process where your body changes from its juvenile (kid) form to one that is sexually mature (an adult). That’s the very scientific way to think of it, like caterpillars becoming butterflies. The thing about humans though, is that reaching sexual maturity doesn’t necessarily mean mature enough to start having sex.

It just means biologically able to have sex that results in reproduction. This switch from child to adult isn’t instant, so even starting your period doesn’t necessarily mean your body is in prime shape to start having babies.

The process takes a few years, as we’ve mentioned, and as unfair as it seems, it’s different for everyone. Most people start puberty around 11, but some start it younger and some later. And these changes can feel pretty uncomfortable and annoying sometimes.

So while you might be so jealous that your bestie is already wearing a bra, they might hate that they’re trying to figure out how to stealthily sneak their period products to the bathroom in elementary school.

By age 16, you’ll probably be finishing up your big puberty changes, and a lot of those anxieties will be half-forgotten by the time you finish high school.

But just because ‘it won’t matter when you graduate!’ might sound comforting, it doesn’t help you right now! So we’re going to give you a heads up about the order that you’ll probably notice the changes of puberty.

The First Signs of Puberty

The first puberty change you’ll notice is your chest. Most guides to puberty discuss ‘breast budding,’ which can be a little confusing.

What this means is that there will be some slight swelling under your nipple, and you may feel some itchiness or soreness as the skin stretches. This is when many people start wearing a training bra or sports bra as it can help relieve some of this discomfort. It can also provide more support when you’re exercising or playing sports, and save you from some ‘obvious nipple’ embarrassment if you’re wearing tight or light-colored shirts.

However—wearing a bra or not is a totally personal choice. Do what’s comfortable for you!

From then on, the next few changes will happen in roughly this order, but it’s different for everyone!

They’ll continue growing and becoming fuller. Their size and shape (yes, they come in different shapes!) will depend on genetics. Your nipple may change in size and color, and it’s also normal for one breast to develop a little faster than the other.

You’ll start to notice hair under your arms and on your pubic mound. You’ll also start growing thicker and/or darker hair on your legs, and sometimes on your upper lip. This is all normal, and again, very informed by your genetics. Look to your family members for an idea of what you’re in for!

You’re going to hit a serious growth spurt for about a year! You might grow 2-3 inches per year, for a year or two. After that, it’ll slow down to just an inch or two a year again. This rapid growth is a major annoyance when it comes to buying clothes, and you can feel a bit awkward if you’re suddenly towering over everyone.

You may notice ‘growing pains’ which are a type of muscle ache in the mornings or evenings. Massage and stretching can help!

You may also notice your hips, thighs and butt becoming bigger. It can all feel a bit awkward as your body starts to sort itself into a new shape. (We’d be lying if we said we didn’t wack our hips into a few tables and doorways during puberty.) But, it will all start to settle down soon!

Unfortunately, you’ll start to notice zits on your face and neck, sometimes on your shoulders and back as well. You’ll also notice yourself sweating more. Now is a good time to switch up some of your hygiene habits, because your body is producing A LOT more oil and sweat.

Look up dermatological advice specific to teens, as your skin’s needs are a little different than people at other points in their life. Unfortunately, you might feel like hiding your face behind your hair an oversized hoodies, but that won’t help.

Worse, ignoring your acne can cause permanent scarring. But the right cleansing and moisturizing routine can help, as can certain medications.

Though you can’t see it, your uterus is growing! Around two years into puberty, you’ll start noticing vaginal discharge in your underwear. As well, your first period will be on its way. We have a blog section devoted to everything you need to know about starting to menstruate, from PMS to cramps, so take your time, read a lot, and ask your parents a lot of questions!

Most people start their final stage of puberty around age 15. But this can vary! If you haven’t started noticing any of the changes we’ve mentioned so far by age 15, you may want to talk to your parents about it. Chances are they are keeping track of your height and development.

It may be that both your parents were ‘late-bloomers’ themselves! But it may also be worth a visit to the doctor’s to check that everything is okay.

If you’ve been ticking the puberty boxes so far, this what the last stage of puberty will look like:

Your breasts will have more or less reached their adult size and shape—though they can continue to develop and change through age 18. They’ll also change somewhat through your adult life if you gain or lose weight, if you go on hormonal birth control, or if you become pregnant.

You may have thought you were done with this, but nope! During late puberty, your pubic hair may reach your inner thighs. But again, this can vary from person to person!

You’ll have reached your full adult height about one or two years after your first period. So relax! You finally know your jean length. (Until the style changes again, of course.)

Your hips, thighs, and bum will continue to fill out in shape, so we maybe spoke too soon about the jeans thing!

Your acne woes may not be over until your early 20s, unfortunately. As mentioned, certain medications (including hormonal birth control) can help your skin concerns. Talk to your doctor for a referral and do your best not to pick!

Your reproductive organs and genitals are fully developed, and your period will have become regular anywhere from six months to two years after your first one. You may not be mentally or emotionally ready for sexual activity yet, but it is important that you know about sexual protection.

Mental & Emotional Changes You Can Expect During Puberty

It can feel like your body is going through a revolution during puberty, so it’s no wonder your mind and moods can feel all over the place! It’s really a mix of your reaction to this big body changes (and social changes in your life) as well as the flood of new hormones in your body.

Your brain is a body part (one that doesn’t stop developing until your early 20s) so you shouldn’t discount the changes it’s going through as well. People talk flippantly about ‘hormonal teenagers,’ but there’s a lot more to it. Some of the emotional changes you might notice heightened during puberty are:

A certain level of emotional change is normal with puberty. And it changes all the time! It feels like every year you’ll look back on things that used to be such a huge deal, and wonder what you were thinking. But, puberty is also when a lot of people start to experience more serious depression or anxiety issues.

It can feel really embarrassing or stupid to talk about this with your family or friends sometimes. But, the practice you get talking about minor things make it much easier to talk about it when something serious is wrong!

Is Puberty the End of Your Body’s Big Changes?

By the time you finish high school, it’ll feel like your body’s big changes are behind you. But your body will still have some tricks up its sleeve waiting for you! Thankfully though, you’ll feel a bit less unprepared for changes. And, a little less alone having seen everyone you know go through it!