Can Taking the Contraceptive Pill Increase Your Levels of Oxytocin (The ‘Love Hormone’)? 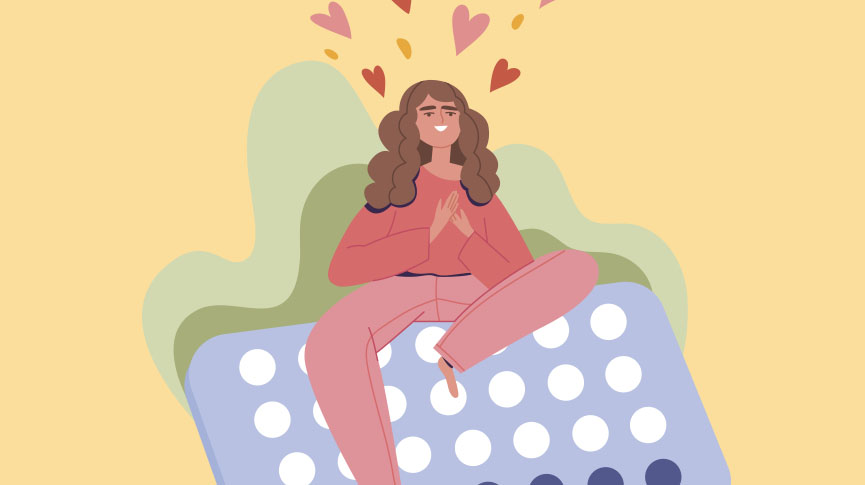 Whether you’re taking the contraceptive pill or not, or you’re possibly thinking about it, there are many questions that usually come to mind. Will the pill make me put on weight? Will it affect my emotions? Is it actually an effective form of birth control? All of these questions are completely valid.

But during these questionable moments, there’s another aspect that you may want to factor in. That is, does the contraceptive pill increase your levels of oxytocin?

Does The Pill Increase the Hormone Oxytocin?

What is the Contraceptive Pill?

Oestrogen is a sex hormone responsible for the development and regulation of the female reproductive system and secondary sex characteristics. Progestin is a type of synthetic medication that mimics the natural female sex hormone, progesterone. Progesterone is a steroid sex hormone involved in the menstrual cycle and pregnancy.

These two hormones (oestrogen and progesterone) are naturally made in a woman’s ovaries, but when the birth control pill is taken, these hormones are changed as a means to prevent the release of an egg during ovulation. Progestins, for example, create a thick and sticky mucus around a woman’s cervix which will then prevent sperm from entering the uterus.

There are some contraceptive pills that don’t contain oestrogen, only progestin. This kind of birth control is great for those who experience negative side effects of oestrogen or for those who cannot take it for medical reasons. This contraceptive pill is called BCP and must be taken every single day to avoid unwanted pregnancy. If taken as such, only two or three women out of 100 will get pregnant.

Oxytocin is often known as the ‘love hormone’ for a number of reasons:

What Triggers the ‘Love Hormone’, Oxytocin?

There’s not a huge list of prerequisites for oxytocin to be released. In fact, for the most part, it’s merely released because of another person. As we mentioned, oxytocin has the power to foster bonding between mother and child, better relationships, and increase sexual connection. But it can also be triggered in almost any form of social bonding or positive physical contact.

In fact, a study on chimpanzees found that even sharing a meal has the power to trigger the release of oxytocin. And so, now that we’re up-to-speed on the basics of the contraceptive pill and oxytocin, let’s find out if there’s an actual link between them, shall we?

Is There a Connection Between The Birth Control Pill and Oxytocin?

Indeed there is! In a recent study published in Nature’s Scientific Reports, it was found that the levels of oxytocin changed in response to the birth control pill. Is this a good thing? Well, yes and no. The study looked at 185 women with an average age of around 21 from the USA. The conclusion was that those who took the birth control pill had significantly higher levels of oxytocin than those who didn’t.

“Our study presents, for the first time, evidence for changes in the levels of oxytocin in the response to birth control, providing a mechanism by which some women experienced altered moods. A constantly elevated level of oxytocin may mean that it is not secreted in the same dynamic way as under normal conditions. It is precisely these dynamics that are important to our emotional lives. This may explain why feelings such as closeness, attachment, and love appear to be altered in some women who use birth control pills,” said Michael Winterdahl, the leader of the study, of Aarhus University in Denmark.

Essentially, what Winterdahl discovered is that those who take the birth control pill may experience a high level of oxytocin for a prolonged period, which would hinder the effect of experiencing a “buzz” when a small amount of oxytocin is naturally released. In this way, one’s mood may be stabilised, yes, but there may be a decrease in interest and pleasure.

In other words, these higher levels of oxytocin associated with the contraceptive pill could be the answer for those who experience extreme mood swings, but over time they may be deprived of positive social feedback, which could result in depression.

Alyssa Dweck, MD, a gynaecologist in New York, weighed in on the topic by saying:

“To go as far as to say that because your oxytocin levels may elevate with birth control pills, this is why your mood or quality of life might be better is a pretty far stretch. So many things go into what determines somebody’s mood”.

Ultimately, there are some pros and cons associated with taking the contraceptive pill and its ability to increase one’s level of oxytocin. At the same time, however, there are some things to question regarding the study. For one, it was relatively small, and two, it is hard to conclude that those results are valid given that the researchers did not have any insight into the personal lives of the participants. Needless to say, more research would be extremely useful in the future.