Everything You Need to Know About Your IUD and Sex 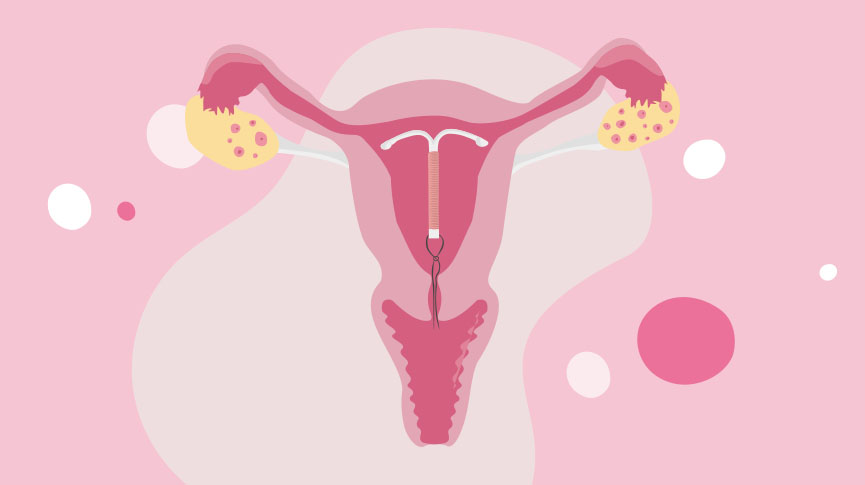 For many, getting an IUD (intrauterine device) is an effective and long-term form of birth control that can easily be reversed. For that reason, it’s become increasingly popular as opposed to other forms of birth control, such as condoms, and the contraceptive pill. Still, however, many have a lot of questions surrounding the IUD… especially when it comes to sex.

So, if you’re thinking about getting an IUD, you already have one or are looking to educate yourself and others considering it, here’s a go-to guide on everything you need to know about an IUD and sex.

What is an IUD?

An IUD is a T-shaped device that fits inside of the uterus. When inserted, it prevents pregnancy by stopping sperm from reaching and fertilizing eggs. This form of birth control is inserted into the uterus through the cervix by a medical professional and has strings that keep it inside of the vagina. These strings are there so that a professional can remove it when the time comes.

There are various types of IUDs. Some release a small amount of the hormone progestin into your body, allowing it to work similarly to the birth control pill. Some popular brands are Liletta, Kyleena, Mirena, and Skyla. This kind of IUD is great for those who have heavier periods, as it can help reduce a heavy flow, and they usually last anywhere from three to six years, depending.

Then there are hormone-free IUDs, such as ParaGard. This is a copper IUD, and works by triggering the immune system to prevent pregnancy. This kind of IUD lasts longer than hormonal IUDs (up to 10 years). For peace of mind, an IUD is more than 99 percent effective, if used correctly, and most healthy vulva owners can use them. One thing to be aware of, however, is that IUDs do not prevent the spread and contraction of STIs.

Can You Have Sex While Wearing an IUD?

You absolutely can have sex while wearing an IUD. In fact, that is why an IUD is inserted in the first place—to allow you to have sex while almost eradicating the chances of falling pregnant. However, you should wait at least 24 hours before having sex after you’ve had an IUD inserted (you should also refrain from taking a bath or inserting objects into the vagina such as tampons or sex toys). This is simply to reduce the chance of any infections.

Having said that, it’s also important to find out all of the relevant information about the type of IUD you’ve gotten, as each kind has their own list of guidelines, do’s and don’ts. Some may be effective immediately, while others may take a few days to provide birth control.

Is it Painful to Wear an IUD During Sex?

Having sex with an IUD shouldn’t be painful or uncomfortable. During the first few days or weeks, you may feel some cramping or back pain (sexual activity aside), but this is completely normal. Once you’ve gotten used to your IUD, sexual activity, regardless of what it is, shouldn’t cause any discomfort. This is because the IUD itself is very small, and when it’s been properly inserted, it’ll rest inside the uterus with only the strings being accessible via the vagina. It should sit comfy and cosy inside of your uterus, which means that you shouldn’t be able to feel anything at all. If you do feel any pain during sex while wearing an IUD, contact your medical professional, just in case there’s a possibility that it has moved or perhaps wasn’t inserted correctly to begin with.

Can Your Partner Feel Your IUD During Sex?

Even though the strings of your IUD hang from the vagina, if you’re having sex with a penis owner, your partner shouldn’t be able to feel your IUD during sex (even if their penis is more on the larger size). This is because the vagina secretes cervical mucus, which is like a slippery layer between the IUD string and your partner’s penis. So, even if you’re enjoying rough or deep sex, you can rest assured that it is safe, and that this kind of activity can’t dislodge your IUD. Why? Because cervix penetration is impossible, meaning that your IUD won’t be disturbed.

Can Your IUD Fall Out During Sex?

The chances of your IUD falling out during sex are incredibly low. This is because, as we mentioned, the IUD sits in the uterus, so it’s almost definitely inaccessible to anything penetrating the vagina. And because your cervix is so thick, there’s basically zero chance that your IUD can move during vaginal activity. To have your IUD “fall out” would mean that it will have been professionally removed. According to Dr Stacy De-Lin, gynecologist and family planning specialist, this is how your IUD will be removed:

“We use a special device called a ring forcep to grab the string and tightly hold the string, which clamps it in a way that it’s able to be removed from the vagina.”

Can You Get Pregnant if Your IUD Moves?

It’s important to note that the chances of your IUD moving are slim… extremely slim. This, alone, should make you feel more comfortable when it comes to worrying about falling pregnant. But, if you experience the very rare chance that your IUD does move, whether you could fall pregnant or not depends.

Some hormonal IUDs can move up and down while still being effective, but if it is expelled or perforates, it is uncertain whether the hormone progestin will still provide protection. The copper IUDs however must be in the right position at all times in order to remain effective.

Do Sex Positions Matter While Wearing an IUD?

You can enjoy any and all sex positions whilst wearing an IUD. Whether it’s missionary, doggy style, or something more adventurous or complicated, you can rest assured that the position you’re having sex won’t make a single difference when it comes to the effectiveness of your IUD.

Despite that, there are some things that could cause your IUD to shift, such as:

For peace of mind, you should consult a professional if you aren’t able to feel your IUD strings with your fingers (unless you’ve never been able to), feel as though your IUD strings are longer or shorter, and/or you can feel the IUD itself during your normal daily life. Also, if you experience bleeding between periods, have severe cramping (worse than usual), or have an unusual discharge, visiting your healthcare provider is a good idea.

Can an IUD Lower Your Sex Drive?

There are several factors that can influence your sex drive. Things such as your lifestyle, relationship status, levels of stress, mental and health conditions, and medication can all play a part in your libido. When it comes to the IUD however, the chances that it will affect your sex drive negatively are considerably low.

This is because the hormonal IUD releases progestin more locally, i.e. in your uterus, as opposed to your entire body. The copper IUD does not release any hormones at all. With that, very few vulva owners report lower sex drives, regardless of which IUD they have. In fact, the hormonal IUD has been associated with increased sexual desire, decreased sexual pain, and lower levels of sexual dysfunction, compared to before starting the IUD.

To sum up, it’s safe to say that you’re in good hands when you decide to use an IUD as your primary form of birth control. Should you have any concerns or problems, however, remember that your health is a priority, so consulting your doctor is never a bad idea.