Menopause & Brain Fog: Is it Really a Thing? 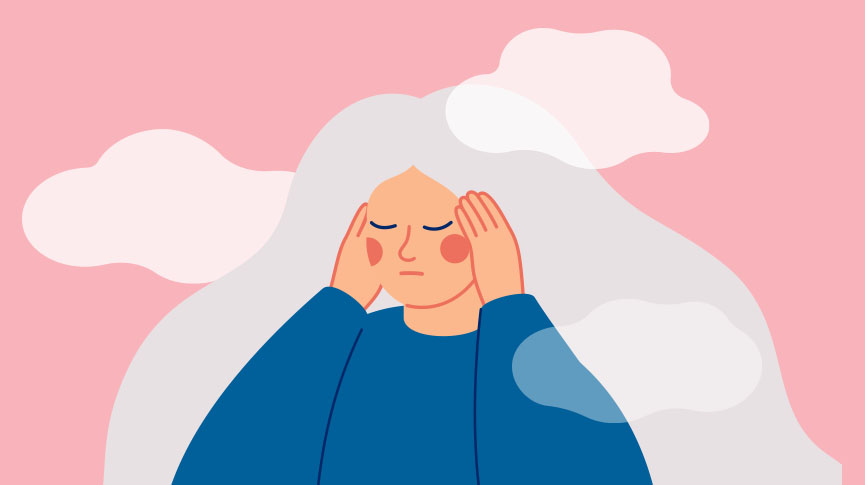 There’s a tendency for many to believe that menopause is a terrible, chaotic, and unbearable part of life. Something horrific affecting all vulva-owners around the age of 45 to 55. Hot flashes, weight gain, vaginal dryness, moodiness, and more. But what if we changed the narrative? What if we, the media, and people in powerful positions, placed focused on the positive things that can happen during menopause, giving vulva owners a glimmer of hope when it comes to entering this new phase of life?

Today, we hope to start an open, honest, and candid conversation about menopause that can hopefully encourage individuals to talk about it in a positive way. We’re not just going to be talking about menopause and brain fog, but also about the different ways you can embrace this chapter.

Menopause & Brain Fog: is it Real?

Before we dive into the question of whether menopause is associated with brain fog, let’s look at a brief definition of what menopause is. Menopause is when the ovaries stop functioning and oestrogen levels drop significantly. Because of this, vulva owners may experience a considerable variation in the frequency and duration of their menstrual cycle during the beginning stages. This beginning transitional stage is known as perimenopause.

Moving swiftly, in a study of individuals starting the menopause journey, participants were asked to perform a series of tasks. One included remembering the contents of a short paragraph right after it was read to them, and then again after several minutes. Researchers also monitored the number of times the participants experienced forgetful behaviour, such as walking into a room and not remembering why, and if or when they lost their train of thought. This study found that 62 percent of the participants experienced cognitive problems during this transitional phase of life.

But what is actually causing this occurrence? The decline is oestrogen levels as well as the fluctuation in serotonin in the brain, both of which can affect one’s mood and cognition functioning. In fact, these hormones are related to activity in the hippocampus, a region in the brain that is responsible for memory processing.

On the plus side, a study carried out at MIT found that levels of serotonin could actually be increased during periods of PMS. This was possible by giving those experiencing PMS a drug that increased the activity of this neurotransmitter.

This study too found that consuming sufficient carbohydrates could also increase their levels of serotonin. Not just that, but those who included carbohydrates in their diet had significantly higher cognitive test scores than those who consumed protein (protein prevents serotonin synthesis).Could these measures then be used as a means to have a positive effect on the cognitive performance of those experiencing menopause? It’s definitely something that should be researched further.

Going back to the initial study, the researchers concluded that, while brain fog during menopause is actually ‘a thing’, it is not something that would severely impact one’s ability to function. It also found a lack of substantial evidence that this brain fog would follow them into postmenopause.

Better yet, a different study by investigators at Harvard-affiliated Brigham and Women’s Hospital (BWH) found that one-third of postmenopausal individuals who scored highest on memory tests displayed brain activity similar to those of premenopausal individuals (despite their low levels of estradiol—a form of estrogen produced by the ovaries).

How to Work Through Menopausal Brain Fog?

Now that we’re more in the know when it comes to menopause and brain fog, is there a way to work with it rather than against it? Are there remedies or activities that one can take or practice in order to reduce the effects of menopausal brain fog? Yes! At the same time, it’s important for those going through menopause to know that it’s a normal stage of life and that, by talking about and normalizing the experience, it need not be seen in a negative or fearful light.

And for those who may be experiencing brain fog during menopause, and are afraid that it’s the beginning stages of Alzheimer’s, there is little to worry about this being true. Memory function impairment is a common side effect of menopause, so try not to worry too much about it being Alzheimer’s or any other cognitive disorder (but, of course, be mindful of how you’re feeling and seek advice if you have any concerns).

And so, let’s take a look at five ways you can embrace menopause, change the narrative from a negative to a positive, and reduce the undesirable effects thereof.

5 Ways to Reduce the Undesirable Effects of Menopause

Hormone replacement therapy (HRT) is a treatment that relieves some of the symptoms associated with menopause. It effectively replaces the oestrogen that gets lost during this period, and can aid in less hot flashes, night sweats, mood swings, vaginal dryness, and reduced sex drive. It can be taken in various forms, either orally, topically, vaginally, or worn as a patch.

It’s been shown in a study that physical exercise can improve one’s cognitive functioning. Researchers found that aerobic exercise training has the power to increase the size of the anterior hippocampus, which is the area directly associated with memory functioning. You could practice 30 minutes of cardio exercises, such as walking, jogging, water aerobics, or cycling, at least five times per day. And you may be interested in strength training too, such as lifting weights with eight to 12 repetitions.

Keeping your mind in shape can definitely aid in better memory function not only during menopause but also as you age. Engage in fun activities that exercise your brain such as doing puzzles, crosswords, or word searches. You could even start a new hobby such as learning how to play the piano or chess, knit, or paint. Another idea would be to create word pictures, which is when you visualize the spelling of a word in your head and then try to think of other words that begin or end with the same two letters. Or, you could draw a map from memory every time you visit a new place.

By eating whole foods and healthy fats, you could reduce some of the negative side effects of menopause while keeping your heart and brain healthy. Consuming foods such as fresh fruits and vegetables, whole grains, fish, beans and nuts, and olive oil (similar to a Mediterranean diet) is highly recommended.

Brain fog can be considerably worse when accompanied by poor sleep. And while a lack of sleep is a symptom in itself of menopause, there are some things you can do to try and get some quality sleep. We recommend not eating large meals close to bedtime, staying away from hot, acidic, and spicy food which can affect your hot flashes, and to stop drinking caffeine well before you rest your head. You could also use a fan to keep cool during the night, and/or practise stress reducing activities such as yoga or deep breathing.

And so, while there are negative side effects associated with menopause, including brain fog, it’s evident that there are many different ways to work through and improve them. This need not be an awful period of your life, but rather a moment in which to settle into yourself and embrace how your beautiful body is changing.