Diarrhea and Your Period: What’s the Deal! And What About Constipation? 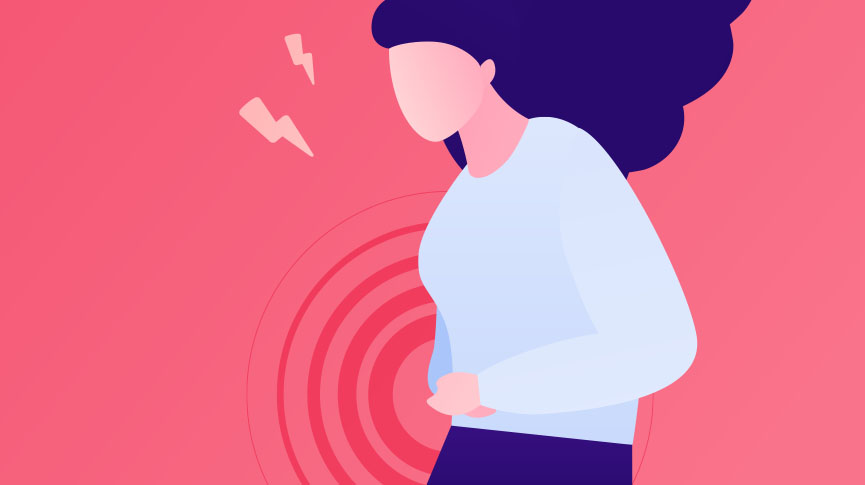 If you’re of the fairer sex, the chances of experiencing a not-so-happy tummy during your period are high. And not just because of those awful, often debilitating, period cramps and bloating! Indeed, diarrhea, or even pooping more frequently, and your period often go hand-in-hand. In fact, nearly three-quarters of women admit to having gastrointestinal issues before or during their period. Why? The short answer, hormones!

Why Do You Get Diarrhea While on Your Period?

Vulva owners experience incredible changes in hormone levels throughout their cycles. But when it comes to that time of the month, prostaglandins are busy little bees. Let’s elaborate… A few days before your period, when your uterus lining begins to shed, the hormone prostaglandin is released. This hormone tells your uterus to contract, prompting the expulsion of period blood. And when prostaglandins really get to work, they can cause a bit of tension further down, to your intestines. In other words, your stool won’t have much time to harden as it’s been told to move swiftly along, resulting in diarrhea.

Prostaglandins are a group of lipids that are made at the site of tissue damage or infection, such as injury or illness. They control processes such as inflammation, blood flow, and the induction of labor. And in the case of the female anatomy, prostaglandins trigger muscles in your uterus to contract during your period and when you’re in labor. During the first day of your period, this hormone is high, which is why you’ll usually find that the first and second day of menstruation is more painful than the others.

Then, just before or near the end of your period, your progesterone levels increase. Your uterus lining starts to thicken again, and this is when the uterine contractions stop. The same kind of signal is then sent to the bowels, which could result in constipation.

“[Bowel movements] can change with different hormone levels,” says Frank Marrero, MD, a gastroenterologist with the Lake Charles Memorial Health System in Louisiana. “In fact, some women may even notice the opposite and become constipated during their period.”

Is it Normal to Have Diarrhea Whilst on Your Period?

It’s completely normal. As we mentioned, it’s a common complaint among many women. But if you find that you have severe diarrhea and/or suffer from the following conditions, it may be best to visit a professional:

Is There Any Way to Prevent Diarrhea Period Poops?

There are a number of ways that you can reduce period-related diarrhea, or even prevent it altogether. Just be aware that everyone’s body is unique and that what might work for one may not work for another. Perhaps none of these solutions will work at all.

We do however encourage you to try some of them in hopes of easing or eradicating diarrhea during your period:

Staying Healthy During Diarrhea on Your Period

Diarrhea During Your Period: When to See a Doctor

For many, getting bouts of diarrhea just before and during a menstrual period is normal.

But if you find that it’s interfering with your normal everyday life, such as the symptoms below, it’s best to consult a professional:

Diarrhea and Your Period, FAQs

In case there’s a question you’re pondering on that has yet to be answered above, here are three FAQs on diarrhea and your period.

Why do period poops smell so bad?

If you find your period poops smell bad or worse than non-period poops, it could be because of your premenstrual eating habits. There’s often a decrease in impulse control during pre-menstruation, which means that you may be prone to eating different foods than normal.

Can I prevent my tampon from coming out during a bowel movement?

Some people may push out their tampons whilst making a bowel movement because of the strain. You could opt for a different menstrual product, like a menstrual cup, which is more likely to stay put.

Do I have to change my tampon after every poop?

The Opposite End of the Spectrum: Constipation

And finally, before your period, or after it ends, you may think you’re in the clear when it comes to digestive issues. Then, you experience constipation! What’s that all about? Well, as we mentioned, when your menstrual period ends, there’s an increase in progesterone. This causes food to move more slowly through your intestines, causing you to feel backed up.

This too is normal, but there are some things you can do to help relieve constipation:

Some may argue that going through menstruation is a curse. And sure, symptoms such as diarrhea, constipation, bloating, and cramps aren’t, in any shape or form, a joy. But menstruation is powerful, and a way to connect to your most feminine and divine power. You, menstruating individuals, are sheer magic.

1 thought on “Diarrhea and Your Period: What’s the Deal! And What About Constipation?”