Do You Suffer from Insomnia During PMS? Here are Possible Reasons Why! 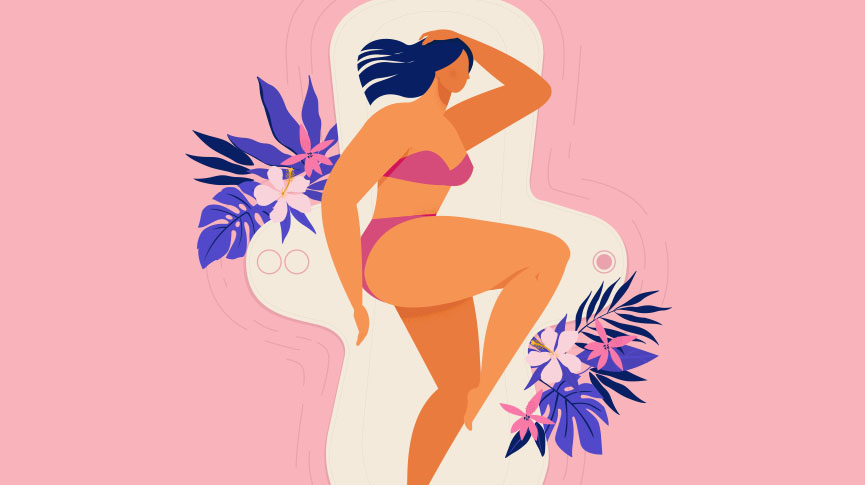 As if there weren’t enough reasons to dislike PMS (premenstrual syndrome), there’s yet another disruption you may be experiencing during this period. Perhaps you had no idea that it was correlated to PMS, but today, we’re going to look at the link between insomnia and PMS. Yes, it’s an actual thing!

Have you ever found yourself tossing and turning right before, and perhaps during, your period? This in turn, most likely, makes you feel even more irritable the next day as we know that a good night’s sleep contributes to a much happier disposition and more productivity. Well, now you have something to blame: PMS! In fact, this uncomfortable situation happens to around two out of 10 individuals during PMS.

Why Does Insomnia Occur During PMS?

The reason for insomnia during PMS is really quite simple: all of those annoying symptoms you may experience, such as bloating, breast tenderness, and muscle or pelvic pain (the common symptoms of PMS) are actually the reason why insomnia may occur. Like a snowball effect. Go figure!

According to Sara Nowakowski, PhD, a sleep researcher at Baylor College of Medicine, “The worst time for sleep and mood, even in people without major PMS, is during the four to five days before your period through the first two days of your period”.

As we already mentioned, sleep and mood often go hand-in-hand. For those who are living with anxiety or depression, their sleep is often disrupted which very often has a direct impact on their overall mood the following day. But even those who don’t appear to have any signs of stress, anxiety, or depression find that their sleep is disturbed before their period.

Hormones That Impact Your Sleep During PMS

While we’ve discovered that the main culprit when it comes to insomnia during PMS is, in fact, caused by other symptoms of PMS, there may be something else to blame… your hormones. During a menstrual cycle, one’s level of oestrogen and progesterone rise and fall. And right before your period, aka PMS, the levels of progesterone are higher than that of oestrogen. Experts believe that this hormonal shift may be another reason why sleep is impacted during this stage of the menstrual cycle. In other words, it’s the change of hormones itself that may cause insomnia.

There’s not much substantial data to back up this claim, but what we do know is that there are oestrogen and progesterone receptors in the brain, including in areas involved in managing sleep.

“Progesterone at higher doses is linked with being sleepy, which is one reason why women with PMS might feel sleepier during the day,” says sleep physiologist, Foina Baker, PhD. Not just that, but one’s level of serotonin (the happy hormone) fluctuates during the later part of one’s menstrual cycle. Lower levels of serotonin can cause depression, food cravings, fatigue and sleep problems.

Then there’s also the link between melatonin (the sleep hormone) and oestrogen and progesterone. The receptors of all these three hormones all occur in the same areas of the brain. In fact, melatonin is even found in human ovarian fluid. The research thus far shows that, in some cases, progesterone and melatonin oppose each other, and in other studies, they support each other.

For that reason, no concrete evidence has yet to be uncovered about the relationship between progesterone and melatonin and how it affects your sleep. On the other hand, oestrogen has been found to reduce melatonin, perhaps leading to insomnia.

Interestingly, and frankly, quite sadly, those living with premenstrual dysphoric disorder (PMDD) showed a decreased response to melatonin in their luteal phase (the stage of one’s menstrual cycle after ovulation and before one’s period), making them even more prone to sleep disruption.

Other Factors That Influence Your Sleep During PMS

Baker continued to talk about other factors that could be influencing your level of sleep during PMS. They mentioned one’s body temperature as being a possible reason for insomnia, saying that it rises after ovulation and remains up until one gets their period. This then interferes with one’s sleep pattern, as usually it’s a lower body temperature that helps individuals fall asleep. With a warmer temperature, there’s perhaps discomfort, making it harder to fall or remain asleep. Another reason that may contribute to a lack of sleep during PMS includes polycystic ovary syndrome (PCOS). Studies have shown that those with PCOS have a higher risk of developing sleep apnea, which is when one stops breathing for short periods during sleep. And while sleep apnea usually doesn’t wake a person up, it definitely contributes to a disturbed quality of sleep, resulting in feeling sleepy during the day, fatigue, irritability, headaches, mood changes, and more.

Ways to Get Better Sleep During PMS

The good news is, that there are a few remedies to try that may soothe you and help you to overcome dreaded insomnia during PMS.

We suggest that you give one or more of these ideas a go in an attempt to get better sleep during PMS:

Talk to a Professional

And there you have it! The reason why so many of those experiencing PMS may suffer from insomnia, as well as several different techniques and tips to try if you’re one of the unfortunate ones. We all deserve restful sleep, so we hope that you’ll be able to curb your tossing and turning during PMS and beyond!